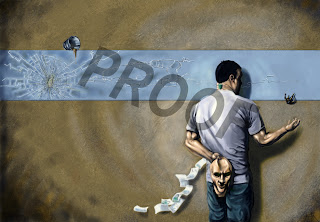 Sometimes storytellers use the far future as the setting to make fantastic extrapolations and to explore compelling ideas. In this volume, however, the writers look forward a mere decade and present stunning scenarios, explore exciting possibilities and warn against the harrowing pitfalls that may lie just a few steps ahead of us. What will life be like ten years from now? Sixteen extraordinary writers offer their own mind-bending answers to that question, their singular 2020 Visions…

Editor Rick Novy has gathered together an incredible array of writers and stories to look ahead to the future ten years hence:


(The picture above is a proof of the cover image by artist Jonathon Fowler, inspired by Alex Wilson's "Nervewrecking." We'll show the completed version with titling and back-cover text soon.)

Publication of 2020 Visions is set for November 15. We are offering a pre-order special for the print edition starting immediately: $13.95, shipping included, plus a complimentary one-year electronic subscription to M-Brane SF Magazine. Apologies to readers outside the US, but we can't offer this special outside the US at this price due to shipping costs, though the book will be available in other normal channels after publication. US domestic readers may use the Pay Pal button below to place their order (one does not need a Pay Pal account to use Pay Pal; credit cards and e-checks may be used by way of Pay Pal).