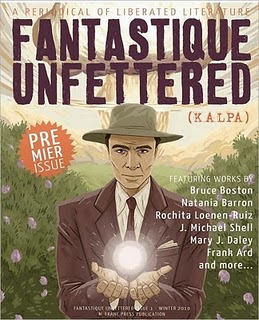 I am reprinting here a great review of our periodical Fantastique Unfettered. But you may want to instead visit its original posting at the Future Fire site because links to a lot of the writers are intact over there.
Reviewed by Nader Elhefnawy
M-Brane Press, the publisher of small press science fiction magazine M-Brane SF, launched a fantasy counterpart to that publication last year, Fantastique Unfettered (or FU). Under the editorship of Brandon H. Bell, FU has as its stated purpose the publication of ‘well-written, compellingly readable, original stories of fantasist fiction,’ both short fiction and poetry, which is ‘unfettered by traditional copyright,’ so that all its content carries a Creative Commons CC-BY-SA license.
The authors appearing in the premier, Winter 2010 issue of the publication, which has eleven short stories and three poems in its 140 pages, offer a wide range of approaches and settings. Perhaps exemplary in this respect is the story to which the issue’s cover art is devoted, Michael J. Shell’s ‘The Death of a Soybean’, which presents an off-the-wall alternate version of the Manhattan Project and World War II. More a uchronia than an alternate history, ‘Soybean’ surreally scrambles the events of our timeline rather than exploring a counterfactual scenario, with Robert J. Oppenheimer just a Los Alamos security guard who happens to be eccentrically preoccupied with an idea called ‘nuclear fission,’ and a femme fatale lady physicist with the unlikely name of Maladi scheming, seducing and killing her way to fame, fortune and a place in scientific history.
Offering a nightmare complement to Shell’s noirish dream is Kaolin Fire’s ‘The Aetheric God’, in which a young technician named Asher who spends his days building steam-men for his employer ‘Chief Technician’ Father Isaiah. He spends his nights hiding in the cathedral’s library-desperately burying himself in its books to try and quiet ‘the voice of God within his head’ calling for Asher’s mutilation and destruction, a crisis that soon enough moves out of his head and into the physical world.
Going in a sharply different direction from either is Alan Frackelton’s ‘A Blessing From the Blind Boy’, the story of a disgruntled gaucho named Juan Hernandez who burglarizes the mansion of his ruthless landowner employer somewhere (and somewhen) in twentieth century Latin America, putting Hernandez’s young son Ramon in the center of a cycle of revenge, loss and longing.
In a lighter, more fanciful vein, Rochita Loenen-Ruiz’s ‘Breaking the Spell’ (a reprint from Philippine Speculative Fiction 4) has for its protagonist a little girl who becomes fascinated with the miniature world her father keeps under a bell jar. While her father’s fairy tales never ring true for her (she is ‘determined not to kiss a prince’), entry into that little world becomes the object of her own fairy tale quest.
However, in contrast with exoticism, the issue favors toward contemporary contexts, and compared with the world-changing (and rather nihilistic) events of Shell’s story, or the intense confrontation with the supernatural of Fire’s, subtler uses of speculative elements inside quieter, more personal stories. The descriptor that came to mind when I read Frank Ard’s story of a love triangle between a man, mer-man and woman ‘Small Fish in the Deep Blue’ is ‘slipstream.’ Others incorporate surreal intrusions into what might otherwise be a realist narrative, like in Mary J. Daley’s ‘The Book of Barnyard Souls’, in which a young farm girl named Kalee receives nightly visits from the souls of deceased animals; Natania Barron’s ‘Without a Light’, in which a sixth-grade teacher in a small town starts an affair with a mysterious colleague; Elizabeth Creith’s ‘Five Oak Leaves’, where a man encounters a young changeling girl living on the street.
In Anna Manthiram’s ‘Boris’, a meditation via fortune cookie-like clothing tags on the titular character’s involvements with various women; Christopher Green’s ‘Holding Hands’, in which a Vietnam veteran encounters a girl he left behind at thirteen many years later in his wife’s ballet studio; or Michael J. Deluca’s ‘The Driftwood Chair’, in which a man roams the beach trying to cope with the loss of a love; it is possible to blink and miss the speculative touch.
By and large the sensibility is ‘literary,’ and the quality is high (the two, of course, not always the same thing), virtually all the stories assembled here working, though to different degrees and in different ways. ‘Death of a Soybean’ succeeds on the strength of its pacing and strangeness, Fire’s ‘The Aetheric God’ on the nightmarish force of the telling. The poems offer similar grandiosity, particularly Bruce Boston’s rich, dark, chaotic ‘The Time Traveler Leaves History Behind’ and Alexandra Seidel’s glittering ‘In Babel.’ Daley’s touching ‘Barnyard Souls,’ is the most emotionally resonant story in the volume, though the pieces by Frackleton and Creith also succeed on this level.
That combination of quality and variety means that Fantastique Unfettered #1 offers something for many different tastes, in what seems to me a very promising start for the new publication.
This review is released under a Creative Commons Attribution-ShareAlike license, (c) Nader Elhefnawy. You are free to republish this review anywhere you like, so long as you give attribution to the author and to The Future Fire and keep this license text intact in any copy.

Posted by Christopher Fletcher at 6:44 AM