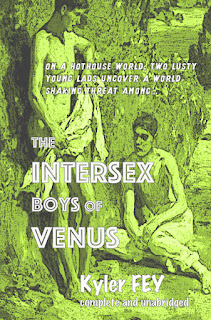 Kyler Fey's blog also has this information plus a brief excerpt from the story. Kyler's blog is somewhat "NSFW," by the way.

We are close to release of the next installment, which I think is titled Twilight Boys at the Earth's Core! (with the exclamation point, yes) but there has been some discussion over the wording of that title. But I think we're going with it. Kyler discusses the word-choice consideration in another post on his blog, and explains what he likes about his usage of "twilight" in this context. 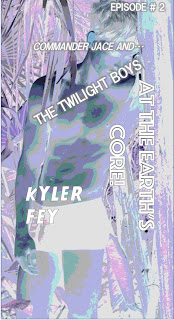 This other image is a possible, though likely not final, version of the cover for Earth's Core!, and it's based on the design of the cover for The Strange Case of the Tattooed Twink. We may use this basic design, but with a licensed stock photo image of a model (this one is just some random dude from a Tumblr feed).
Posted by Christopher Fletcher at 6:11 AM No comments:

In the foreword to Kyler's Fey's semi-fictitious sex-confessional One Hundred Times, it's explained at some length that we concocted the plan for this gay science fantasy serial with the idea that it would be a quick run of fairly short ebooks, possibly all rolling out at once. But then somehow we ended up releasing the 35000-word novella The Intersex of Boys (intended as Episode #5 of the serial) in a lovely print edition, as part of a double back-to-back with One Hundred Times (the two volumes are out separately as ebooks as well). Because, if we're going to do it all, why not over-do it?

To make publishing out of the series' intended order work, some references to things in Intersex Boys from earlier unpublished episodes of the series that were not relevant to the story at hand were either removed or bumped into footnotes during the final edit so that the fifth installment can stand on its own without needing to know anything about episodes #1 through #4.

But now we have the very start of the thing, episode #1, The Strange Case of the Tattooed Twink. As of this posting, it's already live in the iBooks store, and it will probably pop up on Amazon by tomorrow. We'll update with links when it's live everywhere. UPDATED 3/13: It's live Amazon now, too.

From the product description and series overview...

In Episode #1—while some of the boys are away on a mission to Moon—Commander Jace and the rest of his team encounter an enigma on a beach, an ornately illustrated and beautiful young man who seems drawn to them, as if he were waiting to be found. But why was he there? Did someone send him? Is his mission a threat? They bring him back to the Home, but their unusual guest cannot speak, so Jace gives the telepathic Braden an order to peer into their visitor’s mind in that particular way that only Braden can. Will a day of intense passion in Braden’s bed unlock the secret of the tattooed twink, or will Jace and the Unsuitable Boys be left with an even bigger mystery?

A thousand years from now and in another history, the Solar System teems with life. Ships sail the aether, linking humanity’s thousands of disparate nations and clades on all the planets and their many moons. Wars flare and fade, conspiracies thrive and then die, loves and lusts burn hotter than the sun. It is the age of the apex of the children of Earth, but in the deep background of the affairs of sprawling humanity, sinister forces, preternatural phenomena, ornate evil, and bizarre schemes reach everywhere. Standing against these, on the side of light, is the super-powerful Commander Jace and his elite (and lusty) cadre of astonishing queer young men…the so-called “Unsuitable Boys.”

Posted by Christopher Fletcher at 4:43 PM No comments: