We are very close to publication of Kyler Fey's The Twilight Boys at the Earth's Core!, and I noticed on Fey's Tumblr yesterday that his dream-state is evidently fairly infected with the fantasy elements of that story, particularly a variant on male pregnancy of which there a couple in his fictional universe.

I also posted on my journal today about the frequency of "mpreg" in his stories.

Fey's mpreg/Bieber dream-story is below (warning: a bit explicit sexually; also probably kind of crude to some sensibilities).

Posted by Christopher Fletcher at 2:19 PM No comments: 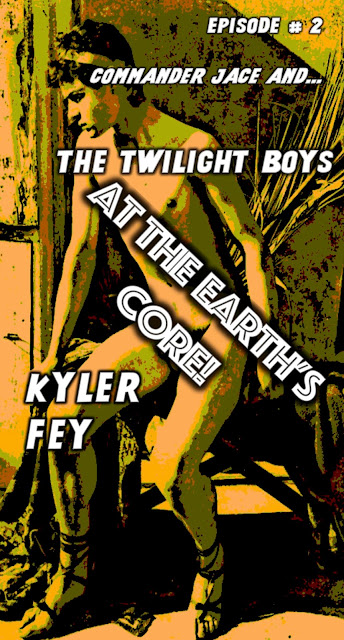 Publication is imminently forthcoming for Kyler Fey's Twilight Boys at the Earth's Core!, the second episode chronologically of his Commander Jace and the Unsuitable Boys serial (though it will be the third to be published since we released episode #5 The Intersex Boys of Venus first concurrently with his sex memoir One Hundred Times as standalone ebooks and also as a print double).

The story depicts an uncanny occurrence in which Zane, a young man with the peculiar ability to "translate" himself physically from one location to another while in an erotic dream state, repeatedly visits an alien land inhabited by beautiful but strange people who seem to be partially plant-based. Living under a dome-like sky with a pale pink sun suspended in it, these people welcome Zane into their society and he seems to spend long periods of time there while in his own world just a few minutes passes. It seems harmless enough but, as always for Commander Jace and his crew, a mysterious threat lurks just out of sight. Will Zane discover the real nature of the "Twilight Boys" and why he finds himself transported into their world?

The author showed a different cover for his new book on his blog a couple weeks ago, but we have decided to go with this one. It's derived from an old photo titled "Boy with Palm Leaf" by Wilhelm von Gloeden, a turn-of-the-twentieth century photographer who worked mostly in Italy and is best know today for his male nudes, many prints of which were confiscated and destroyed as pornography during the Fascist period in Italy. I think I have managed to get away with having a fully naked dude on the cover by using the title text to obscure his genitals.
Posted by Christopher Fletcher at 1:44 PM No comments: