Below is the post from last week announcing Fey's new book. Today we offer free downloads of the epub-format book via Box. This is the link. NOTE: when you go to the link, it will say that format is "not supported" which might make one say WTF and leave unsatiisfied. This means only that Box does not support an on-screen preview or on-site reading of the thing because it doesn't support previews of epub files like it does for Word documents or PDFs. But if you click the download arrow, you will for sure get the book and be able to open it in your reading app. 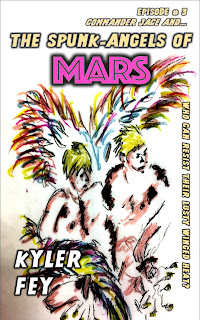 M-Brane Press releases today as an ebook on Amazon Kyler Fey’s The Spunk-Angels of Mars, the third episode of his queer-erotic science fantasy serial Commander Jace and the Unsuitable Boys (though it’s the third installment, it’s the fourth published because we started with Episode #5 in February). In this third episode, some more of the general premise of series’s universe is exposed as well an important part of the backstory of one of the major regular characters. From the blurb on Amazon:

…Before he joined Commander Jace’s “Unsuitable Boys,” the spectacularly body-modified Trace Battle lived a bizarre life as a breeding-slave and an elite rentboy. During enslavement on the planet Mars to one of that world’s rulers, he found himself at the center of a series of remarkable events that shifted the course of Martian history and bound him forever to its future.

…Years later, ghosts from that past return in the form of strange and stunning winged men, and they have a message for Trace and all the members of his team.

…The Earth below and space above will quake when the Unsuitable Boys are visited by the Spunk-Angels of Mars!

Overview of the series…
A thousand years from now and in another history, the Solar System teems with life. Ships sail the aether, linking humanity’s thousands of disparate nations and clades on all the planets and their many moons. Wars flare and fade, conspiracies thrive and then die, loves and lusts burn hotter than the sun. It is the age of the apex of the children of Earth, but in the deep background of the affairs of sprawling humanity, sinister forces, preternatural phenomena, ornate evil, and bizarre schemes reach everywhere. Standing against these, on the side of light, is the super-powerful Commander Jace and his elite (and lusty) cadre of astonishing queer young men…the so-called “Unsuitable Boys.”

A novella of 30,000 words, this story contains details of m/m passion in fantastical settings.

A reader of these stories so far can glean that a plot thread is developing, one involving a great threat to the main characters, that will eventually reach a climax someday, though the nature of its impact remains a mystery. Several clues, however, come forth from Trace’s backstory, and it becomes apparent that Commander Jace is preparing for some kind of major machinations even though he resides mostly in the background of this episode aside from a flashback depicting his first encounter with Trace and framing chapters  at the start and end of the story. Aside from the queer male-on-male sexual content that dominates most of this novella’s text, readers will also encounter some planetary romance elements on this universe’s version of “Old Mars,” as well as some more “mpreg” action. Spunk-Angels resembles in style the preceding volumes with its frequent shifts in point-of-view and timeframe, but this one is set mostly in the past as compared to the previously-published episodes, but still with a narrative frame that pulls its point into the storyline’s “present” era.

It also differs slightly from the other episodes in the relative grittiness of its depictions of the interactions among the characters. The author says, “The angel story is set mostly a couple decades prior to the rest of the series before Jace’s work to finally destroy corporate human slavery had really taken hold. Trace, while younger than the Commander, is a lot older than the rest of the Boys, and he experienced his formative years during the last phase of the sperm-slaver era. For these reasons, the events and tone of Spunk-Angels have a brutality to them that was not as evident in the other episodes so far. All this will make more sense later in the series when the climax ties back to the Mars events.”

At the end of the book, there’s a little teaser blurb for Episode #4, The Lust-Virus of Krampack, which will finally close the rest of the gap between episodes #1 and #5. At this time, the series is projected to run for twenty episodes though we have discussed condensing some of the stories into fewer episodes.

Once Krampack is released (hopefully next month), we might make a print omnibus of the first five episodes with some special print-only features. That is assuming that a perhaps nine-hundred page print book makes sense.

Also of note for the completist is this other title that Kyler rolled out last month. The intent was a one-off sex memoir or “autofiction” as he calls it. It describes a still-ongoing hook-up that he has with a young man, but it also veers wildly into fantasy and includes an alternate-universe tie-in to Spunk-Angels. For ninety-nine cents, it’s a sweet look into Fey’s filthy head.
Posted by Christopher Fletcher at 1:53 PM