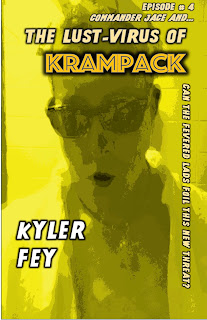 Because I love a pretty print book, I am considering compiling the first five episodes into a paperback omnibus. I think I can get it put together for a December release since I can follow the formatting of episode #5 for the four episodes that have not yet been prepared for paper and hopefully not get bogged down in a time-consuming formatting project. If this happens, there will be an ebook version of the omnibus as well. The print version will be a fairly thick book and look nice on the shelf (or on the bedside table, or under the bed) of any enthusiast of m/m erotica.

1. When Colin Vorta—currently a member of Commander Jace Dekka’s “Unsuitable Boys” entity—was a student at the Dhalgren Academy in Kruze City, he and his friend Kyler More made for their senior thesis an experimental film (with themselves as the lead actors) titled Krampack, which was derived from an ancient play of the same title. The source material describes a sexual coming-of-age for two teenage male friends who, while left alone together for a few days at a beach house, set out to attempt to their lose their virginities with girls. This pair has a history of sexual experimentation with each other as well, engaging in a ritual of jerking each other off in bed in the dark, a custom that they refer to as “krampack.” One of the boys is coming to terms with the fact that he is gay and that he probably wants his friend to be his real lover, while the other boy is losing interest in this homoerotic play with his friend and wants to start a life of earnest and frequent hetero fucking.  The film that Colin and Kyler made is shot in black-and-white and is largely a musical with Colin himself singing its major set pieces. They chose costumes and props that evoke a Steam London science fiction milieu and they rendered all of the dialogue and song lyrics in Esperanto, an old artificial language that today has few living speakers. This, they said, was for the purpose of creating the atmosphere of a “foreign film from a country that never existed.” Also of note, the two young filmmakers—during their “krampack” scenes—engaged in unsimulated on-camera sex with each other. Colin, who is not a cis-male biologically but rather a Venusian maph —got pregnant by Kyler during the filming, but he terminated that pregnancy.

2. Two years later, another boy at the Dhalgren Academy—named Dagen Fallada—for his own senior thesis wrote a novel inspired by Colin and Kyler’s film. For his story Krampack Summer Heat!, Dagen merged elements of the general storyline of the film with details from his own life. While in the film Colin and Kyler played characters named Nico and Dani, in Dagen’s novel they were simply called Colin and Kyler, and this pair moves through a narrative that is in part the premise of their film and in part a story about the making of their film. Reality and fiction blur together further toward the end of the novel when it becomes apparent that Dagen imagines himself as Kyler More and the narrative become increasingly autobiographical in its details. During sex with the Colin character, Dagen/Kyler impregnates Colin and it is implied that they will carry on with the pregnancy and raise their child together. Krampack Summer Heat! was adapted many years later into a film titled Will You Say My Name?

3. But before that film, nearer the time of the events of the story that will eventually be told in these pages, the wildly popular singer Jaustin Moss released a song titled “Will You Say My Name?” which became a viral hit over much of the Earth and a sort of anthem of summer that year within the queer male-dominated Kruze Republic. That song was in itself an adaptation of one of Colin Vorta’s songs from his Krampack film. Jace Dekka, who had provided financial backing for the initial launch of Moss’s career, encouraged Moss to adapt the song into a synth-pop dance track with a reggaeton accent. The Jaustin Moss rendition replaces much of the original Esperanto lyrics with English but retains the Esperanto in a couple repeating phrases during the chorus.