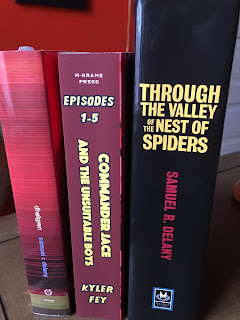 Kyler Fey was pretty impressed with the physicality of his new omnibus edition from M-Brane Press, a book of just over 600 pages collecting the first five "episodes" of his gay, weird and very erotic science-fantasy serial. The previous post has the details. He took a bunch of pics of it to share on Twitter, and seeing those reminded me of the decisions that I made in preparing this paperback version and why I made those decisions (and I figured I'd share for no special reason.). It has to do with two things: being a reader who is aging deep into his forties, and my recent purchase of a Kindle a few months ago, the first dedicated e-reader device I have ever had despite having done fair amount of electronic publishing.

First, I found--as my eyes have aged from simply being near-sighted like I was most of my life into a situation where I need more complex lenses so that I can see both far away and up close--that I no longer find it comfortable to read mass market paperbacks with tiny fonts. This means that the old pulp sf novels and Ace Doubles that I love as objects are not really readable anymore, at least not with ease and pleasure. The Kindle solves that. But my project was still to make a nice paperback book. I never considered a trim size of less than 5x8 for Commander Jace and the Unsuitable Boys. I considered 6x9, but that seemed too big. When I read a paper book, I like to do it on my back on a couch, sometimes with cats lying on me, and the biggest paperbacks and most hardcovers are less comfortable to hold upraised over one's face for very long, and they can cause pain when one falls asleep and loses one's grip on such a book. Due to its sheer weight, I ended up reading Danielewski's House of Leaves a few years ago mostly while seated at a table or lying on my belly with the book opened on the floor in front of me. Again, the Kindle can solve that kind of problem sometimes. I recently bought Samuel Delany's journals collection In Search of Silence on the Kindle rather than in hard copy in part because I knew it was going to be a lot easier to lie around on the couch with it that way. But, again, for the Jace book, the goal was to make an object that is easy to read and not too difficult to hold despite being a fairly hefty book. 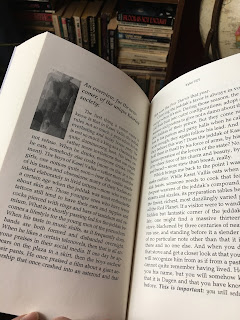 To achieve this goal, the first decision, aside from the page size, was a font and font size. I settled on Book Antiqua 11 point. Nothing too exciting about that choice, but the font is to my eyes very readable and presentable without drawing a lot of attention to itself. I used to favor Garamond, and used it for a couple projects for a few years ago. I still like it, but I think it's legibility is a hair less good when the Italics version is used, as it needs to be periodically in this book. The great and amazing publisher Two Dollar Radio uses that one a lot (maybe always? I noticed in the front matter of for a few of their titles they note that they use Garamond and laud it as the greatest font ever. By the way, go look for Two Dollar Radio titles--they really have some astounding stuff). I played around with 10-point versus 11-point. If I had gone with 10 then I could probably have shrunk this book by several dozen pages and reduced its cost to print and its retail price a bit. But...ease of reading. It's just a little nicer for my eyes in the slightly bigger font. But was that decision going to make the final product too thick and heavy? Fortunately I have like a thousand other books around here to compare it to, and this is where Kyler's pics also illustrate something. 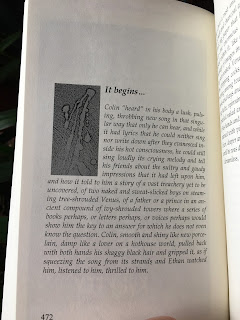 One of these fun pictures shows this book flanked by two thick Delany novels. One of them is the Vintage edition of Dhalgren, which runs to 800 pages. It's spine is actually a hair thinner than Commander Jace's, which only runs to 609 pages, but its font is slightly smaller and the paper it's printed on is very slightly thinner as well, almost but not quite like the thin paper of a Bible. (This is appropriate as Dhalgren is basically "The Bible" as far as I am concerned.) The other one is the Magnus edition of Through the Valley of the Nest of Spiders. This book is also about 800 pages, like Dhalgren, but note that it's a lot taller, and that it is probably about fifty percent thicker than Dhalgren or Commander Jace. Through the Valley is set in what looks to me to be an 11-point font like Jace, and on paper of that same thickness. And it's just a really long novel.  If its page-size were the same as Dhalgren, it would probably be at least a thousand pages. But as it is, it is right at edge of no longer being a lying-on-the-couch book due to its page size and sheer weight. When I last read it, I sat up with it most of the time, resting it in my lap.

I have produced probably about a dozen paperback books for M-Brane, plus a couple for other publishers, and I feel like I know what I am doing when I am formatting on the screen, but I still always feel some anxiety about a new project until I have in hand a physical copy. In particular with this book, due to its thickness, I was worried that the gutter margins weren't generous enough despite what my screen was showing me, but it opens nicely with the text where I wanted it and without having to pull it open too wide once you get the middle, so all is well. Also, I am very pleased that the finished Commander Jace and the Unsuitable Boys omnibus can be read comfortably for a decent period of time while holding it up in the air. It can even, by the way, be held open for a time with just one hand should one wish to do so for some reason. It is, after all, chockfull of explicit erotica.
Posted by Christopher Fletcher at 2:25 PM