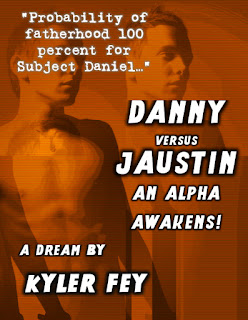 Today we let out this bizarre little one-off by Kyler Fey, the “omegaverse” novella Danny Versus Jaustin: An Alphas Awakens!  This is not part of his Jace serial, which is the main project my press has been involved with for the past year or so, but it contains a few tie-ins to those books (such as the presence of a “Cult Cthulhu” and the existence of drugs like “narcowhirl” and “Erec-T” and “Arou-Z”). This is perhaps unseemly of me as the editor and publisher of this book, but I am going to just go ahead and claim for myself a fair amount of what one might call “creative credit” for Kyler’s work in this one instance.
The day after Easter Sunday, he sent me a very fragmentary short story with a bunch of notes, which he'd spun out from a Tumblr post about an actual sex hook-up with a young man whom he'd met at work and took home to his husband on Easter. I thought about it for much of the day, not really thinking this was a project for the press, but then I decided to give him some notes. I told him that if he was serious about telling such an outlandish story about himself and his spouse, then he needed to give up whatever hesitancy was holding him back from really telling it. “Make Danny—not you—the real protag,” I said. “Because I can fucking feel that this is what you want. You want him to fucking dominate it—and you. Also, this is not anywhere nearly dirty and lurid enough for the promise of its premise. You need to open the gate a bit.” I suggested that he needed to make the child-birth event a lot weirder, and I also gave him the idea for the little set-piece that makes up the end of the story. He amazed me with what he came up with for that part of it, in its hot and slightly cheesy--yet somehow spare--garishness. Though he took my advice to make Danny the true protag, he did give himself the pre-climactic sex scene, and it’s pretty hot (and filthy).
I don’t know this alpha/omega premise as well as Kyler apparently does, but I did read up on it a bit via Archive of Our Own where there’s a shit-ton of fan-fiction set in that kind of universe, and a lot of it is perhaps edgier in its intent than Kyler’s story, but I didn’t read anything that was anywhere near as engaging story-wise, and most of it is not even ten-percent of his quality in its writing. Also, here he has let through a good deal of his sense of humor, by turns wicked and wry and self-effacing. This is not as often evident in most of the Commander Jace stories, but when it does show up, it’s a bright spot and I hope that he will be freer in its deployment as we get into the second half of that serial. Speaking of that serial, the other titular character, “Jaustin Moss,” is a recurring figure in the Jace serial and he is a thinly-veiled reimagining of someone from real-world pop stardom. In this new story, the veil is so thin as to be nonexistent, and I wondered if he should just drop it altogether. But since Kyler had already established Jaustin as a character in The Lust-Virus of Krampack (and he is soon to appear again in forthcoming episode), we decided to let his appearance here be yet another alternate universe version of him.


I’m not promising some kind of revelatory literature for the ages with this rather wacko new item from my press, but I do assert that you have not read anything quite like it today. We have made it available for free for Kindle Unlimited subscribers, and for a mere $2.99 for regular Amazon customers. It runs about 21,000 words.
Posted by Christopher Fletcher at 4:32 PM No comments: